There are not any Event scheduled at this time.

Krewella’s take on “making it” in the music industry.

In this video Jahan, Jasmine and Rain Man of Krewella sit down with their manager Jake Udell and producer/DJ Tommie Sunshine for a panel at Electronic Music Conference 2013. They discuss the difficulties of making it in such a competitive industry and how they dedicated their lives to pushing themselves harder and harder towards success.

Im sure by now you have all heard of Krewella? The quickly rising trio recently teamed up with one of the largest DJ/Producers in ‘Hardstyle’ Willem Rebergen aka ‘HEADHUNTERz’. 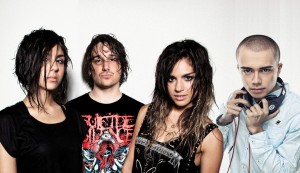 HEADHUNTERz had the closing set at the ‘Circuit Grounds’ following Steve Angello of (Swedish House Mafia) and appeared to play a new track by KREWELLA & HEADHUN coproduced TERz at this time there is no title known. Check out the video below!

The moment time stops… When Gent and Jawns are slaying the venue with over 500 attendees. Kill Paris is setting up his gear, getting ready to finish off the crowd.  And you look over to your side, and Yasmine Yousaf from Krewella is walking towards you. That’s when you know, Hy-Tekk is throwing a party. Krewella is a group formed by Jahan Yousaf, Yasmine Yousaf and Rain Man. They are a three person EDM group from Chicago, Illinois. Formed in 2007, their mixture of Electro and Dubstep has been hitting blogs and airwaves all across the country. After playing a paint and mud filled show right down the road from us, she decides to hit us up. Through all the madness, she still had 10 minutes to get some questions in.

So you just got done playing across town at “Life in Color”, how was that?

It was crazy! We actually played our first “Life In Color” last weekend, so tonight was our second one ever. It was nuts! It was raining, kinda. It was super muddy, but people stuck around and got crazy! All covered in mud, and paint. It was awesome!

You guys are from Chicago, Illinois, right? How do you feel it has inspired your music?

Its funny, everybody talks about Chicago, Illinois being the birth place of House. And obviously, so much respect for that. I am so proud I am from that city, but we actually came up from a few different scenes. Chris came up from the metal scene in Chicago. I was in an Indie band, so I was in the Indie Rock band scene. And Jahan was doing choir stuff. Its so weird. We are all from three different places and some how when we are all together, we form “Krewella”. But honestly, I think the Metal and Rock scenes in Chicago are awesome!

Do you miss Chicago?

Yeah, my parents are in Chicago, and I am such a little Mama and Daddy’s girl… I am still a child at heart; I miss them everyday. So that is really hard. My cats are also in Chicago, which is heart breaking for me. But, as an artist, its probably the most rewarding thing to tour, see your fans, and see them all sing your lyrics back to you. But also, getting to meet your fans and give them sweaty hugs! So there is good and bad in it, ya know? I love doing it, and you gotta sacrifice for what you love to do!

What’s it like to put the three of you in a studio?

Honestly, some times it is just complete pain! We are all like jumping down each others throats, trying to kill each other. “Your idea sucks!” we will say. Honestly, we have some of the worst conversations. Plus, you put Jahan and I in a room…. We are siblings, and we love each other. Honestly, I’m so happy she’s the one in the group. But siblings have their moments. Plus, Chris is like our brother. So you throw three siblings in a room together, with completely different ideas, and three different point of views; it can be madness! The best thing is when we come up with a song, you know that three heads going into it made it a better song; rather then if it was just one of us. So that is the best part!

What big festivals are you pumped up about?

We are playing a ton of amazing ones! Some I can’t talk about yet. The ones I can not announce are, actually, the ones I am most excited about! The ones that are already announced are “Spring Awakening”, in Chicago, Illinois. We played it last year. It was like the first year for “Spring Awakening” and it was one of the best shows I have ever played, ever, in my whole entire career in Krewella. And it was one of our first plays on a main stage at a festival, so I am really stoked! We are also playing “Ultra Music Festival” in South Korea!

Are you afraid to play in South Korea?

What are some things you absolutely need to travel with?

Clif bars are what we live on. It is kinda gross how much we eat them. They are like an all natural bar. I love them, but I might get tired of them after awhile, because I will eat like three a day some times. What else? Extra socks! We go through extra socks like a mother f*&ker!

Do you have any kind of pre-show preparations you have to do before a show?

No, not really. For lack of a better word, it’s pretty chill. We get to the venue, Chris starts chugging Jameson. Johan and I are just having a good time, looking over tracks. Then we go on! If we are singing live, we will do all of our vocal warm ups. But if it is just a DJ set, we just chill out.

Anything big in the works you can share?
Yes! We are actually almost done with our very first album! Its really exciting! It will probably be out in about Three to Four months. But between now and then we will be releasing singles, remixes, and videos. It’s exciting. It is different, but very Krewella. We went on a little bit of a journey with it. It was very cool! About a year in the making!